Allen, Saints Complete Comeback to Give George Tsamis Win No. 1000 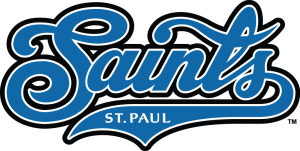 There is really no better way to celebrate a most momentous night than with a dramatic comeback, and that is what the St. Paul Saints provided for Manager George Tsamis on Tuesday. The team trailed 5-2 after four innings, but would rally with four unanswered runs, including two in the eighth to take the lead, defeating the Fargo-Moorhead RedHawks, 6-5. That gave the Saints Manager win No. 1000 in his career.

Each team would score a run in the first. Brennan Metzger led off the game with a double. Maikol Gonzalez grounded a ball to third that he beat out for a single, but the throw was wild, allowing Metzger to score and it was 1-0 RedHawks.

The St. Paul Saints got that run right back. Josh Allen led off the bottom of the first by hitting the third pitch he saw for his third homer of the year.

Fargo-Moorhead would get right back on top in the next frame. Tommy Mendonca started the rally with a walk. Jeff Malm retired the next two batters, but Metzger kept the inning alive with a double into center field that brought Mendonca home to make it 2-1. Gonzalez followed with a run scoring single and the RedHawks led 3-1.

The Saints would get one of those runs back in the bottom of the second. Jayce Boyd walked with one down and moved to second when Justin O’Conner grounded a single into right two batters later. JJ Gould then worked the count full before walking to load the bases. Allen was hit by a pitch, driving home Boyd and it was 3-2.

In the fourth, the RedHawks extended their lead. Yhoxian Medina walked to start the inning and scored when Metzger doubled two batters later. He came home on a sacrifice fly and Fargo-Moorhead led 5-2.

In the fifth, St. Paul would cut into that lead. Max Murphy grounded a ball down to third that he beat out for a single to get it started. Two batters later, Brady Shoemaker doubled to put two runners into scoring position and Murphy scored on a single by Dante Bichette, Jr. to make it 5-3.

In the seventh, Allen would strike again. The St. Paul second baseman led off the inning by turning on a 2-2 pitch and drilling it over the wall in left-center for his second home run and third RBI of the game.

The game went to the eighth with the St. Paul Saints trailing by a run. Bichette doubled down the line in right to start the inning. Boyd followed with bloop that looked like it may be caught, however, it dropped in. Boyd raced into second with a double, but Bichette could only move one base, putting two runners in scoring position with no one out. Richard Prigatano came into run for Boyd before Kes Carter walked to load the bases. A sacrifice fly brought home Bichette, and Gould brought home Prigatano with a single up the middle that made it 6-5 Saints.

That sent the game to the ninth, with St. Paul leading for the first time in the contest. Tom Wilhelmsen came on looking to close out the historic moment. He gave up a lead off hit to Keury De La Cruz before Leobaldo Pina popped out. De La Cruz was picked off by O’Conner just before Tim Colwell grounded out, making Manager George Tsamis the fourth manager in independent baseball history to reach 1,000 wins.