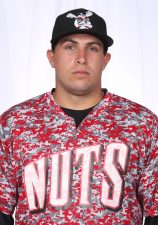 In his second season with the Wichita Wingnuts, Brennen Salgado has helped the team to win their seventh straight division title. While success on the field has made the game enjoyable, it is the brotherhood within the game that has made playing baseball a whole lot more fun.

It does not matter what kind of religious faith you have, the background you come from, or your ethnicity or cultural heritage, the truth remains that no matter what challenges any person faces, it is unity that enables any group to reach the highest levels of success. It is when a group comes together and works toward one purpose that they are able to battle through the most difficult of challenges and succeed, leading Atal Bihari Vajpayee to once say, “Not guns, but brotherhood can resolve the problems.”

In a sport like baseball, which many consider the most individualized of team sports, this may not seem like an appropriate sentiment. This is a team sport, but it is the individual successes that often seem to be more important. Individual batting or pitching statistics dominate the discussion in relation to the game, and so teamwork often is seen as a secondary benefit of winning.

However, there are many within the sport that have an entirely different attitude about teamwork. They not only love the strong bond of friendship that the sport can create, but recognize when there is a brotherhood on the team that the results on the field are bound to be exponentially better. It is those players, like Wichita Wingnuts outfielder/catcher Brennen Salgado, who cherish the relationships that they have built with teammates, and use that as their primary motivation toward greater success.

Brotherhood Was Always a Motivator

To listen to Brennen Salgado talk, his story of how he got into baseball is a common one. His father introduced him to the sport as a kid and he found that he loved playing baseball just about more than anything else in his life. His dad coached him in all but one of his seasons in Little League, not only helping him to progress as a player, but helping to increase that special bond between a father and son.

While this was a big motivator, Brennen loved the fact that baseball gave him the opportunity to spend time with his friends.

His love for the game continued through secondary school, where he started for Glendora High School (CA). In 2011, Brennen earned Most Valuable Player honors in the Baseline League, hitting .457 with 5 homers and 29 RBI. That season he helped to school capture the CIF championship title.

Riding Strong as a Bronco

After graduating from high school, Brennen Salgado decided to attend Cal Poly Pomona so that he not only could continue his academic and baseball careers. His freshman season, he hit .247 in 77-at-bats, appearing in 28 games. Of his 19 hits that season, eight were for extra-base hits, and he scored 13 runs.

In his sophomore season, the numbers for Brennen grew rapidly. He hit .351 in 23-games, but was limited in action due to an injury. It took a little while for him to get his swing back, and so he struggled through his junior year, appearing in 21 games while hitting .163.

In his senior season, Brennen was healthy and his numbers displayed that to the plate. He hit .264 in 26 games with a homer and 8 RBI. It was a solid career with the Broncos, but not one that captured attention of pro scouts, and so it looked like following his senior season that his career on the diamond may have been coming to an end.

Maybe Major League Baseball scouts didn’t think Brennen Salgado had a career in professional baseball, but he sure did. Unwilling to walk away from the sport that he loved to play, Brennen tried out for the Wichita Wingnuts and was brought on to be the team’s backup catcher in 2016. It was an exciting opportunity to continue his playing career, but one that posed its own challenges.

“When they first approached me about it I told them I hadn’t caught in a few years but I would go back there, and then got back there and it felt comfortable again. I liked it and got used to catching again.”

Establishing Himself with a Veteran Staff

It had been more than three years since Brennen Salgado had taken up a position behind the plate, and he was entering a unique situation with the Wichita Wingnuts. The Wingnuts had always built their team around a veteran catcher who handled the staff but, in 2016, they decided to go with two rookies behind the plate. Brennen not only had to become reacquainted with his former position, but learn his veteran pitching staff at the same time.

“For me it was about getting to know them and what they liked to throw in certain situations. You now that you are the new guy and you want to learn what works for them. That means that you have to cater your game to fit theirs. They know what they can do, so it my job to adapt to them.”

While starting out the season as one of the teams catchers, the acquisition of Martin Medina led to Brennen moving to the outfield. He had played well behind the plate, but injuries necessitated the move, and he performed quite well when given the opportunity. Salgado appeared in just 12 games through the first month and a half of the season, but took on a regular role starting on July 2.

The results earned him additional playing time. He played a key role in several wins, including on August 24, when he set a single game-high, driving in four against the St. Paul Saints in a 10-8 victory. By season’s end, Brennen hit. 276 and 52 games, driving in 30 and scoring 20 runs. He also posted an impressive .383 on-base percentage and played well in the outfield, only making one error.

It’s Déjà vu All Over Again

In 2017, Brennen Salgado returned to the Wichita Wingnuts and was likely going to be serving in more of a utility kind of role for the team. With three veteran outfielders and a veteran catcher behind the plate, it appeared that he would see a lot less action than he had the prior year.

However, injuries opened the door for him to get a regular spot in left field, as veteran Brent Clevlen needed to spend more time in the designated hitter role. It was a golden opportunity, but one that took a little while for him to take advantage of.

Through the first two weeks of the season, he was hitting just .183 and there were questions about whether he was able to make the adjustments necessary in his second season in the league. However, Brennen never gave up on himself, and he began to adjust his game to accommodate the new challenges.

“That’s the one neat thing is you never fully develop in this game. There is always change, you can always get better at something. I may have a great game or get off to a great start and I can enjoy those successes, but if you get too high the game can humble you quickly. You also know that you have the talent to make it to this level, and so when you struggle you have to remind yourself of what got you where you are.”

He was fully aware that he could hit, and slowly but surely the average started to rise. By season’s end, he hit .236 in a career-high 94 games, recording career highs in homers (5) and RBI (45). Add to it the fact that he made just for errors in the outfield and it was easy to see why Wingnuts Manager Pete Rose, Jr. had placed so much faith in the rookie.

“Sal is one of those guys who works hard every day, and who the team knows is going to give his best every time he comes to the field,” Rose explained early in the season. “The results may not always be there, but you know he is going to hit. He’s got that kind of bat, that kind of approach.”

The Best Part of the Game

While enjoying participating in the game that he has played since he was a little kid, the fact remains that it is the baseball community that has really made his time on the diamond special for Brennen Salgado. It is not just about the fact that he has made incredible friendships, ones that will be in place for decades to come, but also the opportunity to play against those who he once called a teammate.

“Aside from playing the game, I think it’s the friendships and relationships, the brotherhood that you enter into when you’re playing baseball that are the best part of playing baseball. It’s kind of funny because when I was younger I didn’t realize how close-knit the baseball community is, whether year in college, independent ball, or affiliate ball. It always seems like someone who I know has played with someone I play with now. That’s the fun part for me where you’re going head-to-head against people you played with before. It’s a fraternity, and I like the whole relationship you get out of it. It’s those friendships, that brotherhood that makes the game fun for me.”

Those relationships have become incredibly important to him, because Brennen considers the brotherhood the primary motivator for his desire to push himself on the field.

“Each guy on the team is counting on you. It doesn’t matter if you are in the field, behind the plate, at the plate, or wherever. They need you to do your job and to prepare before each game. You don’t want to go back to the dugout knowing you let those guys down, especially on a team like this where they expect to win.”

A Lesson in Dedication

It is not surprising to see that Brandon Salgado is so dedicated to his teammates. He credits his parents for giving him the opportunities that he has had, and also for demonstrating what true commitment looks like.

“They’ve always been there for me. They’ve always supported me. They’ve always had my back, always told me to go do what I wanted to do. That’s nice because playing any sport you only have a limited amount of time to do it. So, they told me to go play, go have fun and do it while you can because you don’t know how long you be able to do it. They’re definitely my inspiration, my role models, because they worked hard every day to give me and my brothers and sisters the opportunities that we have.”

A year after falling one game short in the championship series, the team has played with one purpose – to return and win the American Association title. With teammates like Brennen Salgado committed to the brotherhood and to that unity, no one should be surprised if two weeks from now the Wichita Wingnuts are popping champagne as the league champions. They will prove that the brotherhood can solve any problem.

By Robert Pannier
Member of the IBWAA