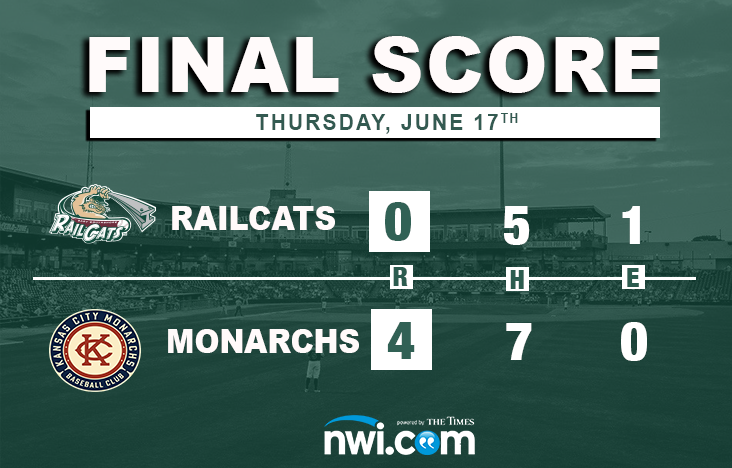 KANSAS CITY, Kan.- For the first time this season, the Gary SouthShore RailCats (15-13) were swept. The Kansas City Monarchs (15-10), winners of a league-best eight straight, won the series finale against Gary SouthShore with a 4-0 shutout at Legend’s Field in Kansas City, Kansas.

NIck Travieso received the win in a stout start for Kansas City as he improved to 2-4 on the year. Travieso dealt six innings of shutout baseball while allowing just four hits and two walks with six strikeouts.

In his professional debut, Cal Djuraskovic suffered the loss after just 1.2 innings on the mound, allowing one run on one hit with three walks and a strikeout.

For the second straight game, Jan Hernandez gave the Monarchs an early lead in the first inning. After a two-run shot in the opening frame of yesterday’s 6-2 final, Hernandez got a hold of a high-fly ball out to left-center field to double in Ryan Grotjohn and take a 1-0 lead.

The RailCats had a chance to tie things up in the third when Tommy McCarthy and Hayden Schilling each led off the inning with singles. McCarthy, camped on third with nobody out, remained there until the end of the half inning as the ‘Cats suffered a ‘strike-em-out, throw-em-out’ play and a strikeout to close out the frame.

The fourth inning provided insurance for Kansas City as they rode a pair of doubles and a single to two more runs, making it a 3-0 game. Before adding one more in the sixth on a long sac-fly scoring Johnny Field from second base.

The sweep marks the first time Manager Greg Tagert has been swept on the road at Legend’s Field in Kansas City.

The Gary SouthShore RailCats return to Chicagoland for a three-game set against the Chicago Dogs at Impact Field in Rosemont, Illi. tomorrow, June 18 for a 7:05 first pitch against the Northern Division rivals.

Five-Run Frame Too Much for Monarchs

‹ Ismael Munguia Homer, Eugene Emeralds make it 3 in a Row Over Hops, 10-9 › Explorers Bats Struggle in Loss to Cougars, 5-1