KANSAS CITY, KS – The Kansas City Monarchs (32-19) got their rally caps out and punched in a walk-off win against the Houston Apollos (7-43). It took a three solo home runs in the home half of the ninth including the final blast off the bat of Colin Willis to notch the win.

Starting the game off, Darnell Sweeney had deja vu, hitting yet another leadoff home run to kick the night off for the Monarchs. It was his third lead off homer of the homestand.

After shutting the Apollos down in the top of the second, Casey Gillaspie started the inning off with a solid hit, putting him on base. Colin Willis followed with a walk, advancing Gillaspie to second. Morgan McCullough then hit a single, marking his eighth-straight hit in a game. With bases loaded, Sweeney came back with a fielders’ choice, scoring Gillaspie and putting the Monarchs up 2-0.

The Apollos stayed quiet until the top of the fourth, scoring two runs to tie the game 2-2. Houston stayed alive in the top of the fifth, scoring eight runs and taking a large lead 10-3 against Jacob Matthys, who was then relieved by Elroy Urbina.

The Monarchs struck back and cut into the Apollos’ lead by putting up five runs 10-8. Gillaspie walked to get on base, then stole third after a single by Willis. Gillaspie then ran it home after an error by the first baseman, and Willis advanced to second. McCullough then hit a single and scored Colin Willis. Daniel Wasinger hit a double, advancing McCullough to third. Grotjohn hit a triple, scoring McCullough and Wasinger. Hernandez walked to first, followed by a single by Guerrero, scoring Grotjohn.

Righthanded pitcher Dalbert Siri stepped onto the mound for his Kansas City debut, relieving Elroy Urbina. Urbina pitched for 1.1 innings. Siri pitched for 0.2 of an inning, before Brian Ellington took over.

In the bottom of the seventh, Hernandez scored for the Monarchs after a ground rule double by Gillaspie, making it a one run game 10-9.

After one inning of Ellington, winning pitcher Ramsey Romano (2-0) stepped onto the mound. Romano allowed one home run in the top of the eighth, extending Houston’s lead 11-9. 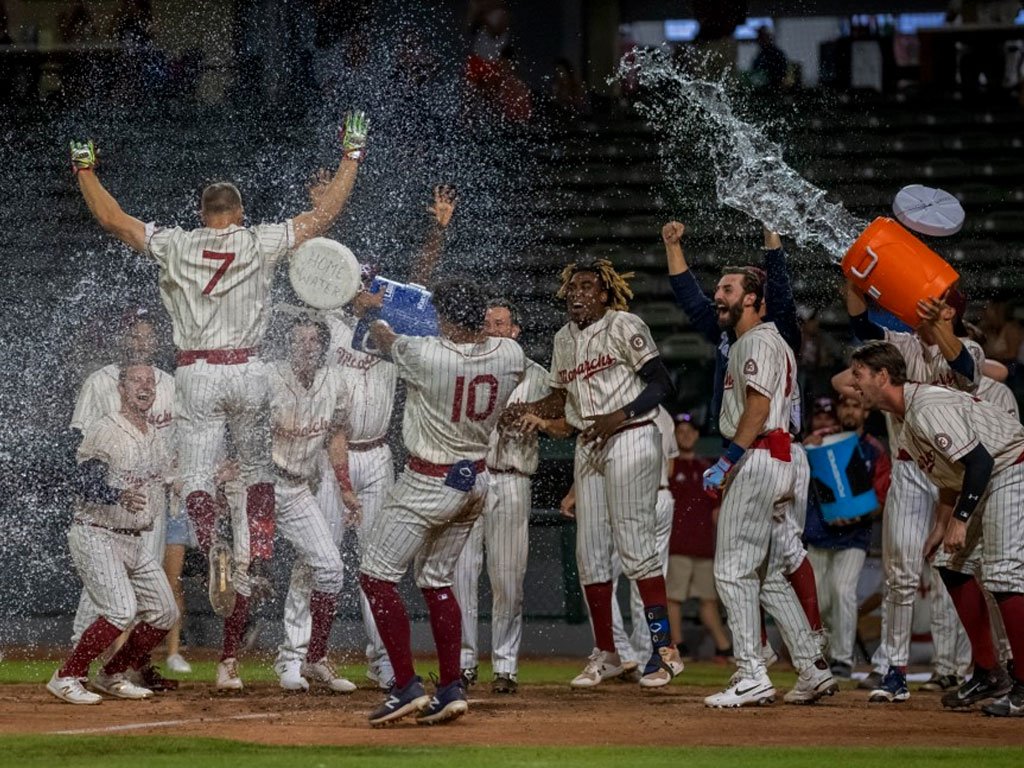 The Monarchs took the walk-off win in fashion the bottom of the ninth with three home runs by Jan Hernandez, Casey Gillaspie and Colin Willis off Houston’s Andrew Click (1-2) who was charged with the loss.

Kansas City will return to action Thursday night to finish the series against the Houston Apollos. First pitch is set for 7 p.m. The game can be heard on the Monarchs Broadcast Network with the pre-game beginning at 6:35 p.m. and the video stream airing on aabaseball.tv.

Winnipeg Goldeyes IF David Washington Named Player of the Week by TWITA, GoMLSR