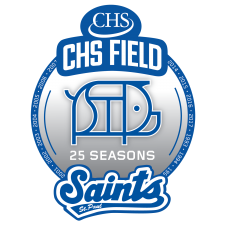 Bo Hellquist was making his second start of the season for the Sioux Falls Canaries and, if this outing was any indicator, he will surely be making a few more. The left-hander limited the St. Paul Saints to 4-hits over 7-innings, and Jabari Henry scored 2-runs and drove in another in the 7-3 victory. That loss dropped the Saints four back in the North Division of the American Association.

The St. Paul Saints took the lead in the bottom of the first inning. Danny Oh walked to start the frame and moved to third on a base hit by JJ Gould. With one down, Anthony Gallas hit a ball down the right field line that tailed foul. Jabari Henry made the catch and threw home. Oh looked like he was nailed, but made an acrobatic move to avoid the tag and then swiped the base with his hand to make it 1-0. Canaries catcher Aaron Gretz and manager Mike Meyer argued that call, believing that Gretz made the tag, but to no avail.

Sioux Falls responded with three runs in the top of the second. Jabari Henry started the inning by reaching on a walk. Chris Jacobs singled into center and Tyler Wolfe followed with a base hit that brought home Henry to tie the score. With two on and no one out, Jason Hoppe threw a wild pitch that moved both runners into scoring position. The Saints starter retired Patrick Fiala on a ground out, but gave up a sacrifice fly to Aaron Gretz that scored Jacobs and gave Sioux Falls the lead. Blake Schmit then singled up the middle to bring home Wolfe and it was 3-1 Canaries.

St. Paul got one of those runs back in the bottom half of the inning. Kes Carter walked to start the inning and moved to third on an error. A base hit by Tim Colwell brought him home and it was 3-2.

Once again, the Canaries responded to the Saints scoring by getting on the board, this time restoring their lead back to two. Burt Reynolds singled with one out, stole second and scored on a two-out hit by Jacobs to make it 4-2.

The pattern of responding continued in the bottom half of the third. Bo Hellquist retired the first batter of the inning, and got ahead of Gallas 1-2. However, his next pitch the Saints slugger drilled over the left field wall for his 19th home run of the year to make it 4-3.

In the sixth, the Canaries extended their lead back to two. Patrick Fiala led off the inning by drilling his fifth home run of the season and second of the series to make it 5-3.

In the eighth, Sioux Falls added one more insurance run. Gretz and Schmit drew back-to-back walks with one down. Motl hit into a fielder’s choice that put him at first and Gretz at third, and Gretz scored on a double by Ty Morrison. That made it 6-3.

In the ninth, Sioux Falls added one more run. Henry led off the inning with his 19th homer of the season. That made it 7-3 which would be the final.

Jabari Henry finished 2-4 with 2-runs and an RBI for the Sioux Falls Canaries. Chris Jacobs was 2-5 with a run scored. The St. Paul Saints were led by Anthony Gallas, who was 1-2 with a run and 2-RBI. He also drew a walk.