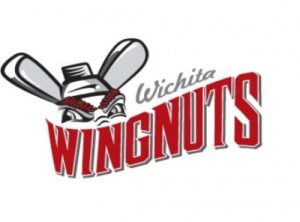 The Salina Stockade may have only joined the American Association a few weeks before the 2017 season began, but they are proving early that the newcomers are ready to compete with the elite of the league. Salina earned a split of their double-header with the Wichita Wingnuts as Daniel Aldrich starred for the Stockade in Game 1, homering twice, and Charlie Leesman earned the Wingnuts a split with a dazzling pitching performance in Game 2, throwing five scoreless innings.

In Game 1, the Salina Stockade earned their first win in the American Association thanks to Daniel Aldrich, who proved to be a one-man wrecking crew. He homered twice and provided all four RBI in the 4-3 victory.

The game started out ideally for the Wingnuts. Brian Smith started for Salina and yielded a run in the first inning. Harrison Kain started the frame by beating out a ground ball for a single. A fielder’s choice put Christian Stringer on first and he moved to second when Brent Clevlen walked. T.J. Mittelstaedt followed with a base hit that brought home Stringer, and it looked like Wichita had something really going, but Smith struck out Matt Chavez and got Brennen Salgado to fly out to end the inning.

In the second, Wichita extended the lead to three. Richard Prigatano walked to start the frame, then stole second. Next up was Zac Fisher. In his first at bat as a Wingnut, he drilled a double to right that scored Prigatano and it was 2-0. Kain walked two batters later, and Fisher scored when Stringer singled to center.

Ryan Kussmaul started for Wichita and he looked good in the first two innings, but it unraveled for him with one swing in the third. Aaron Olivas walked to start the frame for Salina and Roche Woodard singled to left to make it first and second with no one out. Next up was Daniel Aldrich, who laced a three-run homer over the right field wall to tie the score.

In the top of the fifth, it would be Aldrich again. With one down, he absolutely crushed a Kussmaul offering, driving it over the fence, this time giving his team the lead, 4-3.

While Aldrich was handling the run production, Smith settled down and was pitching solidly. After giving up the second run in the second inning, the Stockade starter retired the next eight batters he faced. However, in the fifth it looked like Wichita would tie the score.

Stringer started the inning by beating out an infield single and moved to third on a double by Clevlen. Smith then coolly stuck out Mittelstaedt and his evening was over.

Joe Lewis came on and walked Matt Chavez to load the bases and, once again, Salina turned to their bullpen. Tyler Herr came on and struck out both Salgado and Prigatano to end the threat and the lead remained intact.

The Wingnuts would put two on in both the sixth and seventh innings, but Herr made sure that no one crossed the plate. He got Fisher to ground out to end the game and the Salina Stockade won, 4-3.

Brian Smith (1-0) earned the victory, going 4.1-innings, allowing 6-hits, 3-walks, and 3-runs. He struck out 4. Tyler Herr earned the save going 2.2-innings and striking out 4. Daniel Aldrich finished 3-4 with 2-runs, 2-home runs, and 4-RBI, setting a team record for RBI in a game for the Stockade in their first season in the American Association. Roche Woodard and Joey Miller each went 2-4. Christian Stringer led the Wichita offense, going 2-3 with a run and an RBI.

In the second game, the Wichita Wingnuts came out on top, taking advantage of 7-walks by Salina Starter Chris Cummins, while getting an impressive start out of Charlie Leesman in the 10-1 victory. Leesman tossed five shutout innings, allowing 4-hits for his first win of the season.

Cummins had kept the Wingnuts off the board through the first two innings despite living dangerously with the base on balls, however, that came back to haunt him in the third when Wichita would finally breakthrough against the Salina starter. Stringer walked to start the frame and Mittelstaedt walked two batters later. Both runners then moved on a double steal, and Matt Chavez plated Stringer with a sacrifice fly. Mittelstaedt took third on the play and that proved to be huge, as a passed ball brought him home to make it 2-0. Wichita had plated two without the benefit of a hit.

In the fourth, Wichita extended their lead. With one down, Leo Vargas walked bringing Harrison Kain to the plate. He drilled a ball the other way into right field and it looked like Vargas would score easily, but the ball hoped the wall, sending Vargas back to third on the ground rule double. Stringer then grounded out to second, scoring Vargas and it was 3-0. Following a walk to Clevlen, Mittelstaedt beat one into the turf toward the third. The Salina third baseman charged the ball and attempted to bare hand it, but he could not get a grip, and Kain came into score on the infield hit. That extended the lead to four.

That would be it for Cummins as Dalton Bernardi relieved. However, he struggled to find the plate, and walked Chavez to load the bases. Salgado, who had already walked twice in the game, followed by lining a single just passed the second baseman and into right field. That scored both Clevlen and Mittelstaedt to make it 6-0. Martin Medina followed with a walk and Prigatano then delivered a two-run single to left that scored Chavez and Salgado to make it 8-0.

The Wingnuts plated two more runs in the fifth. Kain started the inning by drilling a ball to the wall in center that barely missed being a home run. He went into second with a double, before Stringer walked. Kain scored on a sacrifice fly by Clevlen and Stringer came home on an error to make it 10-0.

Charlie Leesman (1-0) was done after 5-innings, allowing 4-hits and no runs, while striking out 2. Josh Goossen-Brown pitched a scoreless sixth, but the shutout ended in the ninth when Aaron Olivas singled home Brad Cuyos to create the final score of 10-1.

The final game of this four-game set is scheduled for 1:05 tomorrow afternoon. Jordan Cooper makes his first start for Wichita.