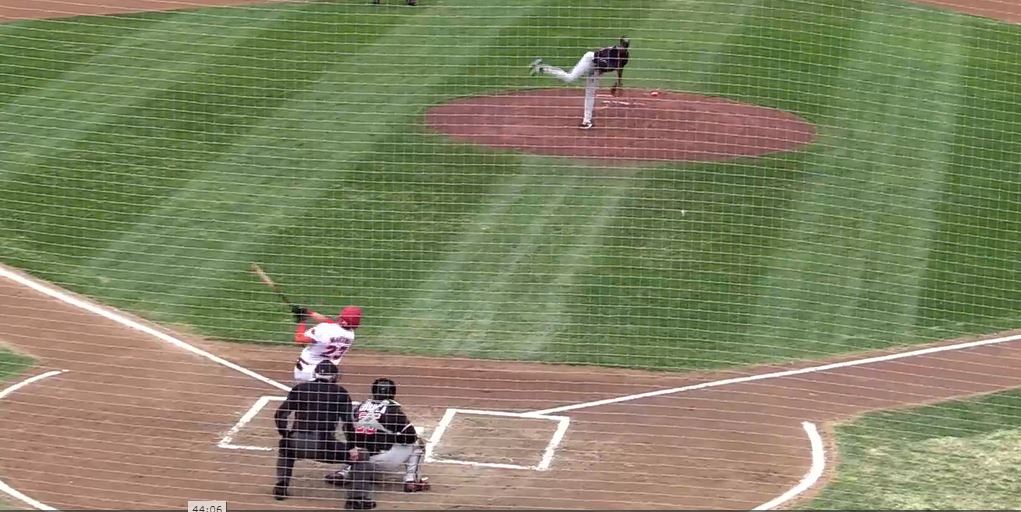 Andrew Martinez homered with the bases loaded in the bottom of the first inning to help stake the Winnipeg Goldeyes to a 5-1 lead and the club held on to earn a 7-6 victory over the Fargo-Moorhead RedHawks on Saturday. Drew Ward homered to give Fargo-Moorhead a 1-0 lead in the top of the first, but an RBI single by Eric Ramirez tied the score. After a pair of walks loaded the bases, Martinez delivered his first homerun of the season.

The RedHawks battled back with a run in the third and three in the fourth to pull within a run. In the eighth, Fargo-Moorhead tied the score on John Silviano’s second homerun of the season. However, the Goldeyes responded with a run in the bottom half of the inning when Logan Hill turned on a 1-2 pitch for his first homerun of the year. Erasmo Pinales came on in the top of the ninth, retiring the side to earn his first save of the season.

After hitting three home runs on opening night, Winnipeg added to. Rivera finished 2-4 with two runs scored and an RBI. Hill was 1-3 with two runs and an RBI. The RedHawks hit four homeruns in the game. Besides the Ward and Silviano shots, Sam Dexter and Kevonte Mitchell also went deep for Fargo-Moorhead. Mitchell had three RBI. Luke Lind took the loss.

The Milwaukee Milkmen scored five runs in the bottom of the fourth inning to grab a 6-4 lead, only to see the Lake Country DockHounds battle back to take the lead. However, a three run seventh inning put Milwaukee back on top for good as they earned a 10-7 victory.

Three walks got the rally started, loading the bases before Logan Trowbridge was walked to tie the score at seven. A ground out scored Mason Davis to give Milwaukee the lead and Trey Martin scored on a wild pitch. Chad Sedio had three hits and drove in a pair of runs for the Milkmen. Trowbridge walked twice and drove in a pair of runs. Despite a tough outing, A.J. Jones came out of the bullpen and earned the victory with three innings of relief.

Lake Country got a couple of big performances, starting with Dai-Kang Yang who had two hits and drove in three runs. Jake Snider had three hits, scored three runs, and hit his first homerun of the season. Gio Brusa also homered for the DockHounds, who recorded the first two homerun game in franchise history. Jesse Remington took the loss.

The Gary SouthShore RailCats scored eight runs in the top of the fourth to earn a decisive 14-5 victory over the Chicago Dogs. Gary scored two runs in the first and three in the second to jump out to a 5-1 lead, but sent 11 batters to the plate in the top of the fourth, scoring eight runs on just four hits. Daniel Lingua had the big blast of the inning, hitting a grand slam for his first homerun of the season. Lingua also added a triple, scored three times and drew a walk.

The top of the order was spectacular for the RailCats, as Javeyan Williams and Michael Woodworth were a combined 4-9 with six runs scored and two RBI. Thomas Walraven and Michael Cruz each drove in a pair of runs. Edward Cuello was solid in his first start of the season, allowing two runs on five hits in 5.0 innings to earn the victory.

Chicago starter Mickey Jannis was rocked in the contest, allowing five runs in 3.0 innings pitched. The bullpen struggled as well, giving up nine runs in 6.0 innings. Harrison Smith had a two-run triple for the Dogs and KC Hobson had two hits and drove in a run.

Nick Franklin homered for the second straight night and Tyler Beardsley allowed two runs in 5.2 innings to lead the Sioux City Explorers to a 4-2 victory over the Kansas City Monarchs. Kansas City opened with runs in the first and second innings to take a 2-0 lead, but Sioux City put up three in the top of the third to jump out to a one run advantage. D.J. Poteet led off with a single and Franklin homered two batters later, tying the score. With two down, Nate Samson blasted his first homerun of the season to put the Explorers on top.

After giving up the two early runs, Beardsley was fantastic, allowing seven hits and a walk in 5.2 innings while striking out five. The bullpen took over from there, tossing 3.1 innings of scoreless relief. Thomas McIlraith came on in the ninth inning in close the door, allowing two to reach but striking out two to earn his second save of the season.

Tyler Garkow allowed one run in four innings, but earned a no decision. Stevie Ledesma earned the victory, allowing one run in 2.0 innings pitched.

Justin Byrd had another big evening, going 2-3 with a run scored and two walks. Josh Altmann and Ryan Long each drove in runs for the Saltdogs.

Railroaders Down Cougars in 11

Cesar Trejo drove home the winning run in the top of the 11th inning and the Cleburne Railroaders added two more runs as they defeated the Kane County Cougars on Saturday, 9-6. This was a fantastic game that saw the Cougars rally twice to tie the score. The Railroaders took a 2-0 lead, scoring single runs in both the first and second innings. However, Dylan Busby doubled home two runs in the bottom of the eighth to force extra innings. Cleburne once again took the lead in the top of the 10th, only to watch Kane County respond with two runs in the bottom half of the inning.

Both starters were excellent in this contest. Vance Worley gave up two runs in six innings. Jalen Evans tossed four shutout innings in his first start of the season. Busby had three RBI as did Trejo. Trejo also hit his first homerun of the season.

Three Stars of the Night

Drew Ward and John Silviano each homered for the Fargo-Moorhead RedHawks on Saturday. Both RedHawks players have homered in each of the first two games…Two grand slams were hit on Saturday night. Daniel Lingua blasted his in the top of the third inning for the Gary SouthShore RailCats as part of an eight-run frame. Andrew Martinez had a grand slam in the bottom of the first inning for the Winnipeg Goldeyes, helping to stake his team to a 5-1 early lead…The Lake Country Dockhounds have shown a lot of pop in their bats early on, hitting .288, third in the American Association. The .493 slugging percentage is second best through the first two contests… Only two teams are undefeated through the first two contests of the year. Sioux City has taken the first two contests against the Kansas City Monarchs while the Milwaukee Milkmen remain undefeated after defeating the Lake Country DockHounds in both early season contests… The Kansas City Monarchs set an American Association record for homeruns by a team in 2021 with 147, but they are only one of two teams who has not hit at least one homerun this year. The Chicago Dogs, who finished sixth in homers last season (104) have also failed to go deep.