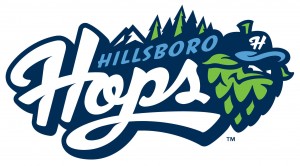 The Hillsboro Hops defeated the Boise Hawks in a close one, 3-2.  The Hops celebrated winning the South Division first half pennant for the second year in a row.  The victory means the Hops will be in the playoffs come September.

Tyler Mark started for the Hops going 3.1 innings and allowing only one hit and struck out one.  It was planned to limit Marks to a pitch count before the game.  Jeferson Mejia (3-3) pitched the next three innings for the win allowing one run on one hit.  Mejia walked one and struck out five.

For the Hawks, Logan Sawyer started and took the loss.  Sawyer allowed three runs on seven hits, walked two and struck out three in 5.1 innings.

The first score of the game was at the top of the first.  With two out, Zach Nehrir slapped a grounder under the glove of third baseman Kevin Padlo for a single.  Trevor Mitsui followed with a line drive down the right field line off the tip of the right fielder Brian Carroll’s glove for a stand up double.  Nehrir hustled around to home from first on the hit.  Josh Anderson brought Mitsui home when he looped a single to right field.  Hops 2-0.

The Hops would score again in the second.  Alexis Olmeda walked on a full count.  Sergio Alcantara slipped a grounder through the right infield for a single, sending Olmeda to third.  With one out, Galli Cribbs, Jr., grounded to second for the fielder’s choice.  Olmeda scored on the throw to first as the double play attempt was too late.  Hops 3-0.

Tyler Follis would help Boise get their first run of the game by walking to start the bottom of the sixth.  Marcos Derkes came to the plate and a wild pitch by Jeferson Mejia sent Follis to second.  Derkes knocked one up the middle scoring Follis.  Hops 3-1.

In the eighth, Carlos Herrera lined a solid hit down the third base line with the ball landing on the chalk line and sending up a cloud of dust for a stand up double.  Marcos Derkes grounded out to short stop Sergio Alcantara moving Herrera over to third.  Kevin Padlo brought Herrera home with a hard hit to left field.  Fielder Gerard Hernandez tried to catch it but it bounced off his glove and to the warning track for a stand up double.  The final score was 3-2.

Sergio Alcantara went 2 for 3 for the Hops.  Alexis Olmeda went 1 for 2 with two walks and scored a run.  Trevor Mitsui went 1 for 3 with a run and an RBI.  Zach Nehrir scored a run.  Josh Anderson and Galli Cribbs each knocked in an RBI.

The Hillsboro Hops (21-15) won the first half pennant and remain two game ahead of the Salem-Keizer Volcanoes.  The Boise Hawks (12-24) slipped down to nine games behind the Hops.  Both teams meet for the final game of the three game series Saturday night.