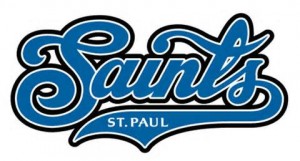 With the first-place Wichita Wingnuts visiting Winnipeg, the St. Paul Saints had to feel pretty good about their chances of at least grabbing a share of the Northern Division lead. Now they simply have to worry about whether they can hold off the hot Laredo Lemurs to at least make the playoffs. For the second night in a row, the Sioux City Explorers pitchers stymied the Saints bats, and their fairly reliable bullpen fell apart down the stretch, securing the win for the Explorers.

The loss, coupled with Laredo winning both of its games today, moved the Saints into a tie with the Lemurs for the top Wild Card spot. It also kept them two games back of Winnipeg for the North Division crown. The two teams do play six games together before the season ends.

Both teams’ starters had their struggles with control tonight. Explorers’ starter Alex Caldera lasted just five innings, giving up only three hits, but walking six. Nick Barnese lasted five for the Saints as well, yielding five hits and four walks. Both pitchers were struggling with high pitch counts and an inability to put batters away quickly, but they had only given up one run a piece. They both left leaving their teams with a chance to win, and asking their bullpen to continue to shut down the other team’s offense. One bullpen did the job, the other, well…

Ben Hughes took over for Barnese in the top of the sixth and he was masterful in his first inning of work, retiring the side in order, and striking out the final two batters of the inning. Not to be outdone, Geoff Broussard took over for Caldera, and he, too, retired the side in order, striking out the first two batters of the inning.

In the seventh, Sioux City jumped on Hughes. Oscar Mesa led off the inning by doubling down the left field line. After Tim Cowell sacrificed Mesa to third and Rene Tosoni walked, Andres Perez grounded a single into leftfield that scored Mesa and gave the Explorers their first lead of the night. One out later Hughes was relieved by Matt Meyer, who gave up a single to Tommy Mendonca that made the score 3-1.

In the eighth Meyer got into trouble right away. He began the inning by hitting Dillon Usiak. Michael Land sacrificed Usiak to second and Usiak would advance to third on a ground out by Mesa. Cowell then blasted a double to the wall in left field, scoring Usiak and increasing the lead to 4-1.

While the Saints bullpen was faltering, the Explorers’ relievers were doing the job. Broussard was mowing down Saints hitters, striking out five in 2.2 innings of work, while giving up just a single hit.

In the ninth, down 4-1, the Saints sent Dylan Thomas to the mound to keep the Explorers bats in check and to give his team a chance to get back into the game. Thomas did not deliver. He gave up a single to lead-off the inning, walked Peter Barrows, and then Mendonca laid down an absolutely perfect 0-2 bunt for a base hit to load the bases. Thomas followed that by walking Amos Ramon to drive home a run, and then Usiak doubled to the wall in centerfield, clearing the bases and making the score 8-1. Michael Lang followed with a double that scored Usiak, and he would later score on a ground out. The ninth inning was over, but not before the Explorers had scored six runs on four hits.

St. Paul was unable to rally in the ninth and fell to Sioux City for the second night in a row. The loss cost the team a golden opportunity to make ground on the Winnipeg Goldeyes, who lost to Wichita. It also allowed Laredo to create a tie atop the Wild Card standings.

The Saints and Explorers will play an afternoon game on Sunday, in what has to be viewed as a must-win for St. Paul. The Saints will send undefeated Drew Gay (5-0) to the mound, while Sioux City counters with six-game winner John Straka.

By Robert Pannier
Senior Baseball Editor
Member of  the IBWAA