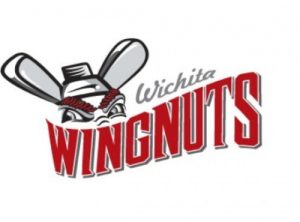 While this may be the last season of Wichita Wingnuts baseball, the team has not been afraid to post some record-setting performances this season. That occurred on Wednesday night when the Wingnuts swept the Winnipeg Goldeyes, winning the final game of the series 7-3. That gave Wichita their first season sweep of Winnipeg in franchise history, as they won all three games north of the border to finish 6-0 against the Goldeyes.

The long ball put Wichita in a hole early on. Charlie Gillies started for the Wingnuts, and retired the first two batters of the inning, but back-to-back home runs by Reggie Abercrombie and Josh Mazzola put Winnipeg ahead 2-0.  For Abercrombie, it was his 15th homer of the year while Mazzola connected for No. 17.

Wichita would get one of those runs back in the bottom half of the inning. Logan Watkins led off of the base hit, then stole second base. He moved to third on his 24th steel of the year and scored on a sacrifice fly by Abel Nieves to cut the deficit to 2-1.

In the fourth, Winnipeg would flex their muscles once again. As he had in the first, Gillies retired the first two batters of the inning, but watched Grant Heyman drill his 15th of the year to extend the lead for the Goldeyes back to two.

In the bottom half of the inning, Wichita responded, scoring three runs to take the lead. Angel Reyes walked with one down and then watched Tony Thomas hit the first pitch he saw from Winnipeg starter Brennan Bernardino over the wall in center for his American Association leading 21st  homer of the season. With the score now tied, Chase Simpson tripled to the wall in right before John Nester was intentionally walked. A sacrifice fly by Logan Trowbridge brought Simpson home to give the Wingnuts a 4-3 lead.

In the sixth, Reyes would extend the lead to two. As Thomas had done, the slugger drilled the first pitch he saw from Bernardino for his 17th homer of the year.

Despite giving up the three home runs, Charlie Gillies (7-5) pitched an excellent ballgame. He came out after seven, allowing 4-hits and walk. The right-hander struck out 7.

In the bottom of the seventh, his team gave him a bigger lead. Jack Charleston came on for Winnipeg and gave up a single to Trowbridge to start the inning. Leo Vargas then laid down a sacrifice. Charleston fielded the ball and opted to go to second trying to get the lead runner. His throw was late, and both runners were safe. Watkins then laid down a sacrifice to move both runners into scoring position and both scored when Zach Nerhrir followed with a base hit into center field. That extended the lead to 7-3.

Austin Boyle came on in the eighth for Wichita and would tossed two perfect innings of relief t0 finish off the game. He struck out two.

With the sweep, Wichita moved to two games behind the Kansas City T-Bones for second place in the South Division. They now move on to take on the Texas AirHogs for four games starting Thursday night. First pitch is scheduled for 7:05.